Its third in the state for our Year 9/10 Boys Basketball team for Division 2 in the SSSA Statewide Knockout Basketball competition!

On Wednesday 16 November the boys participated in the final round of this competition. It was held at The Lights Community and Sport Center where the final eight teams of the competition battled it out for the top spot.

The boys played the minor rounds well, winning two out of three games with some going down to the wire. The first game was won by one point against Bordertown but they lost their second game by a point to the eventual winners of the day, Cedar College.

Finishing second in their pool, they came up against a very strong Wirreanda in the semis and were not able to cement a spot in the Grand Final.

The match for third place was against Thomas More College and, after a strong first half, they were able to win the game 29-26.

A fantastic achievement for the team which wouldn’t have be realised without the boys’ efforts practising as a squad over the last couple years. 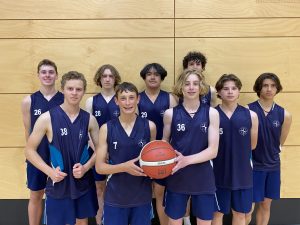